It’s June now and it’s light jacket season for only a short time longer. I love light jacket season. I spent a lot of time watching Buffy the Vampire Slayer and there’s one article of clothing the denizens of Sunnydale, California have a lot of, it’s light jackets. From one episode to the next, it was a never-ending series of cool-looking garb that seemed unnecessary for the west coast. Of course, I was young and fully into the short-sleeves/parka dichotomy. I didn’t understand the necessity and the joys of layering, how one thing isn’t quite enough but the next level up doesn’t make no sense neither.

Also, I didn’t quite grasp that California is, like, 68 degrees the whole time. I just visited twice this past year and I was alternating between sweltering or shivering. Light jacket woulda solved that problem!

So, as a writer, I struggle with the different hats I wear. I’m a writer of fiction (novel I’m 70% finished first revision, I’m looking at you), a writer of personal essay, a writer of weird little poems. I edit for one magazine and am thinking of applying to edit at another magazine. I publish books and I interview artists. I contain multitudes. And sometimes I’m like, man, this is a bit much. Maybe I should simplify.

But really, maybe all they are is a series of light jackets. When is too hot, I take it off for a few minutes until I’m comfortable again. Then I put it back on when I’m ready, because the tree I’m sitting under is giving too much shade. And I walk around until I’m hot again and I want to put on a lighter one. Maybe that’s fine.

Also, if you’re running out of gift ideas, I like thrift store blazers. 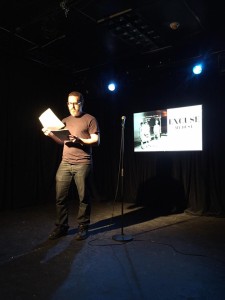 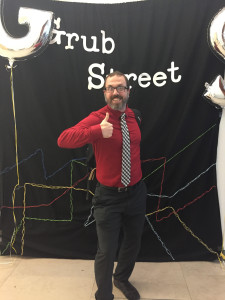 Speaking of poems and Buffy, I suckered the good folks at Barrelhouse into publishing some poems of mine written from the POV of Buffy characters for National Poetry Month.

Our most recent authors at Mason Jar Press are having a reading in support of Not Without Our Laughter on June 18 down in DC. I hope you can make it. They’re real talented. I’ll be there.

I have two new interviews with crazy-talented artists at BMoreArt: the Baltimore Rock Opera Society and That Other Shirt.

Speaking of interviews, I talked to the super smart Andrew Ervin about his new book Bit by Bit over at Cartridge Lit and reviewed said book for Electric Literature. It’s a good book. Andrew and I are bros now.

I featured a bunch of amazing writers for one of my Retrogamer essays and wrote about Curt Schilling for the other.

My friends and colleagues Rebecca Harris and Lisa Lance took over Seltzer Open Mic, which I had been caretaker for. Go see them and read at the open mic over at Charmingtons!

Mystery and Mortality: Essays on the Sad, Short Gift of Life by Paula Bomer
Miles Away by Libby Zay